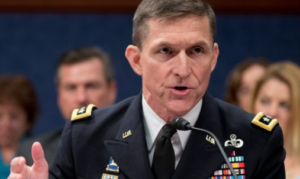 Lt. Gen. (Ret.) Michael T. Flynn, a registered Democrat who has been offered the position of National Security Adviser to President-elect Donald Trump, believes “Islam is a political ideology” that veils itself as a religion, and is unique in that sense because he does not “see a lot of people screaming Jesus Christ with hatchets” or guns “shooting up clubs” or “literally axing families on a train.”

As for Russia and its president, Vladimir Putin, Lt. Gen. Flynn said, “We have to deal with Russia” and “and figure out ways to work with them” particularly because we have more than “5,000 of our own troops there in Iraq trying to fight the rise of ISIS.”